Explore the golden sand dunes on camelback, visit the Gobi families famed for their hospitality, follow in American explorer Roy Chapman Andrews' footsteps in the Flaming Cliffs for dinosaur bones, hike through the spectacular gorge in the Yol Valley, see stunning wildlife and feel the awesome space and freedom of the Gobi. You can ride a camel just for few minutes, while you are visiting a nomadic families and see their lifestyle.

Upon arrival at the Chinggis Khaan Airport in Ulaanbaatar, you will be met by your guide and transferred to your hotel. After check in there willbe sightseeing in Ulaanbaatar. We will enjoy an impressive performance of traditional music and dance at 6 pm.

The spectacular sounds of huumii (throat singing) accompanied by the cherished two-string horse-headed fiddle or morin khuur will be imprinted on your memory forever.

Welcome Dinner will be in one of the best restaurants in the city.Overnight stay in a hotel *** /BLD/

The name Tsagaan Suvarga(White Stupa)is given by local people to the impressive and legendary cliff which is eroded by natural phenomenon.

Having 10 million years history, the cliff indicates different times by its colored layers. Tsagaan Suvarga(White Stupa)is interesting to see the sheer slope, facing east, which from a distance seems to be the ruins of the ancient city. Overnight stay in nomad family . /BLD/ 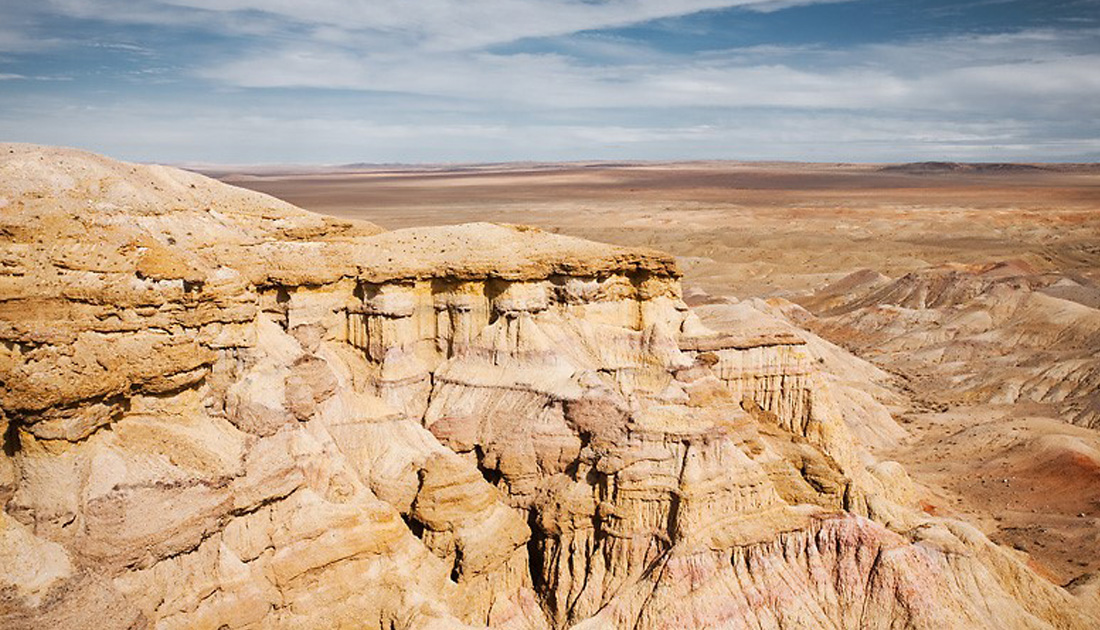 We will visit Gurvan Saikhan National Park in South Gobi. At its entrance we will visit a small museum of Natural History to get acquainted with the flora and fauna of the National Park as well as with some dinosaur bones and eggs found in the Province.

We will drive to the parking area and a pleasant hike through the Yolyn Am (Lammergeyer Valley) will take us to a gorge with ice that exists for most of the year.

This valley is famous for its breathtaking beauty and astonishing scenery - the thick ice in the middle of the Gobi. Overnight stay in tourist ger camp. /BLD/ 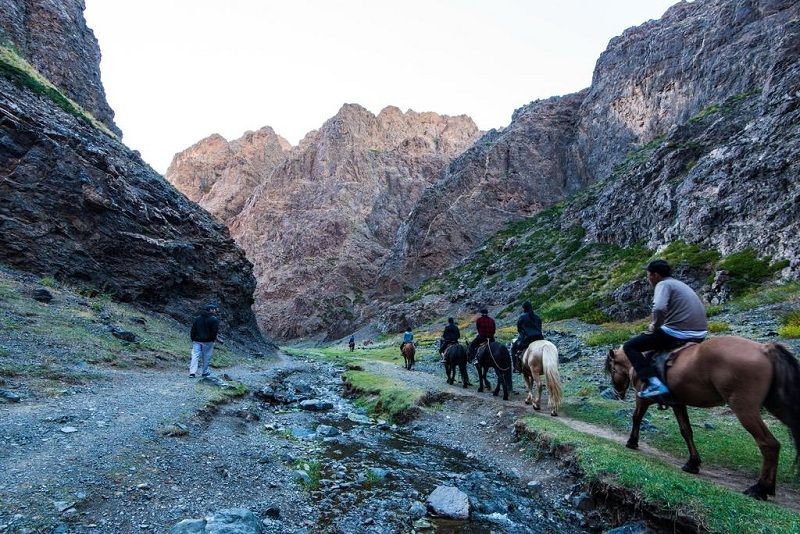 Continue drive west to the extraordinary sand dunes of Khongoryn Els. This is one of the most scenic areas of the Province In the evening, we will climb up to the Singing Dune, one of the highest dunes, to see the breathtaking view of the surrounding area and slide back on a plastic bag if you have one handy.

The moving sand in the wind or when walked on gives out a definite note and makes a noise similar to an airplane passing by, that's why this particular part of the dunes is called "Singing" or "Sounding" would be more precise. 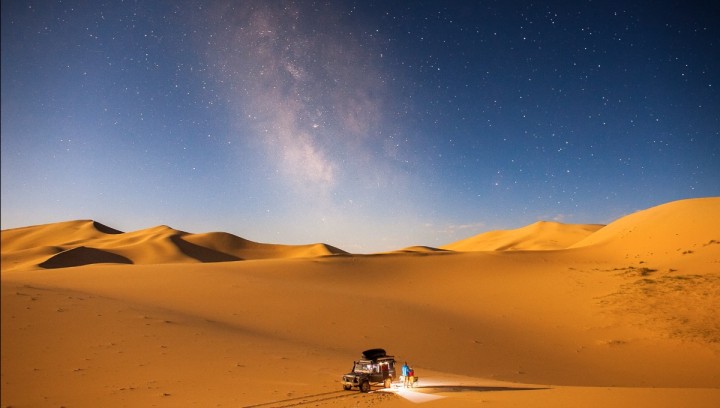 We will stay at the Sand Dunes another day to discover this magnificent place on camelback. Mongolia is home to 2/3 of the two-humped Bactrian camels in the world. It is a gentle, calm and extraordinary patient animal and can carry on without water for a month.

The Khongor Sand Dunes are the perfect place for camel riding.

Bet, you never rode a Bactrian camel, riding a Bactrian camel is much more comfortable than the camel in Sahara, India or anywhere else. Its two humps support you from both sides and easy pace will comfort you so much, that you might fall asleep after a while. But don’t fall asleep, see the spectacular view of the surrounding area. Overnight stay in tourist ger camp. /BLD/

In the western world, this area is well known for the number of unearthed dinosaur remains as Flaming Cliffs penned by Andrews for the red tall rocks formed as a result of wind and water erosion. 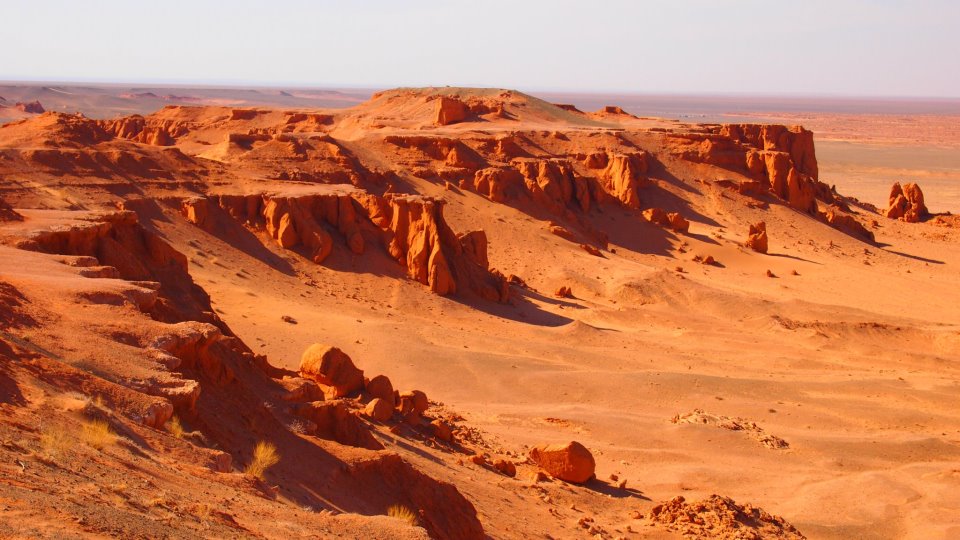 We will explore Orkhon water fall which located in the Ulaan or red river that flows Into the Orkhon River.

The Orkhon River runs through a 20m high steep basaltic canyon to which the Ulaan or Red river flows down from Gyantruun Mountain and forms the waterfall. Overnight stay in tourist camp. /BLD/ 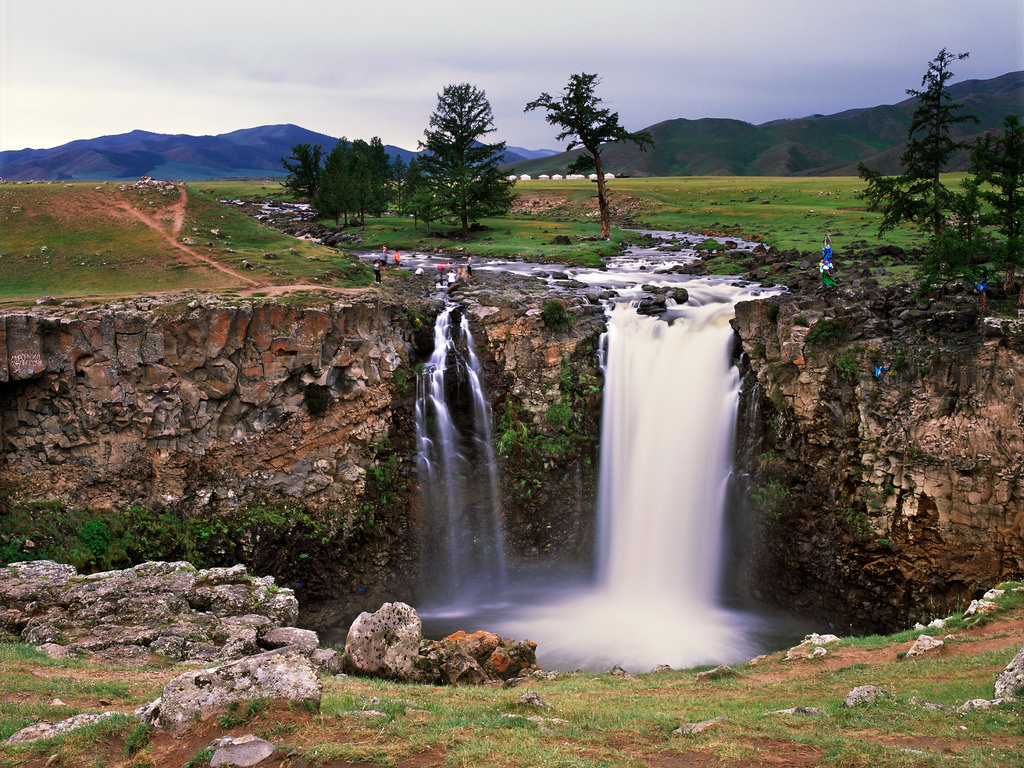 Today we will drive through Arkhangai province, nicknamed the Switzerland of Mongolia for its natural beauty and spectacular scenery of mountains, cliffs, rapid rivers and quiet lakes.

The springing out of deep earth hot spa is 86.5 C and contains various chemical substances useful for treating injuries, wound, radiculitis, fatigue and depression, thus the guests and locals use it with much respect. Relaxing bath under bright stars. Visit a nomadic family. Observe a nomadic way of life and the technology of making milk products. 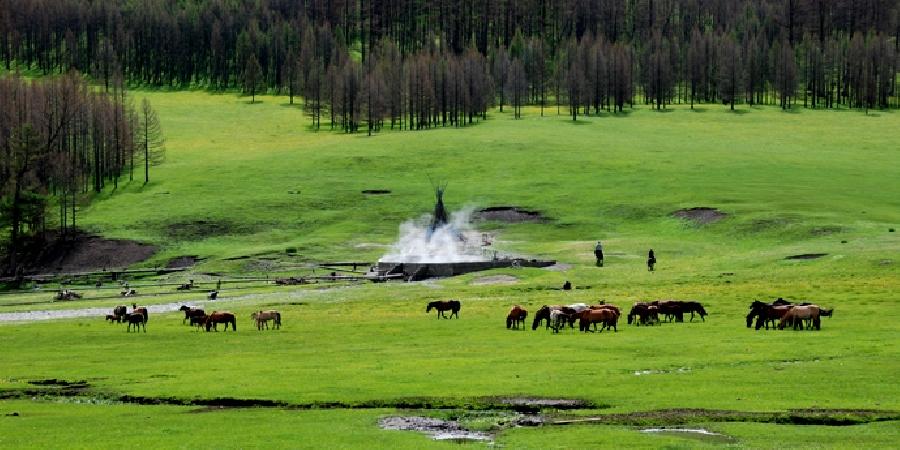 Capital Karakhorum was chosen by Chinggis Khaan 1220. The city was established in 1220. Kharkhorin was the capital of Mongolia for 140 years and the capital of the Mongol Empire for 32 years. Visit to Erdene Zuu monastery.

Look around this historical place. Erdene Zuu monastery is the first Buddhist monastery in Mongolia.

It was built at the initiative of the most influential Khalkha lord Abtai Khan, in 1586 on the spot where Kharkhorin, the famous capital of the Mongolian Empire of the 13th century. The territory of the monastery occupies an area of 400 square meters and is surrounded by a stone wall with 108 stupas.

The stone columns, blocks and sculptures excavated from the ruins of the city show that various building materials were used in the construction of this monastery, which began in the 16th century and continued until the 19th century.

The Hustai National Park was established in 2003 and since that time, for over 50,000 hectars of the Khustain Nuruu area after significant scientific field researches into the area was upgraded to a national park in 1998. In the area of Hustai National Park is a collection of man stone's belonging to 6-8. th century.

We will take back to UB and visit souvenir house .Overnight at hotel after Farewell dinner . Overnight in hotel***. /BLD/ 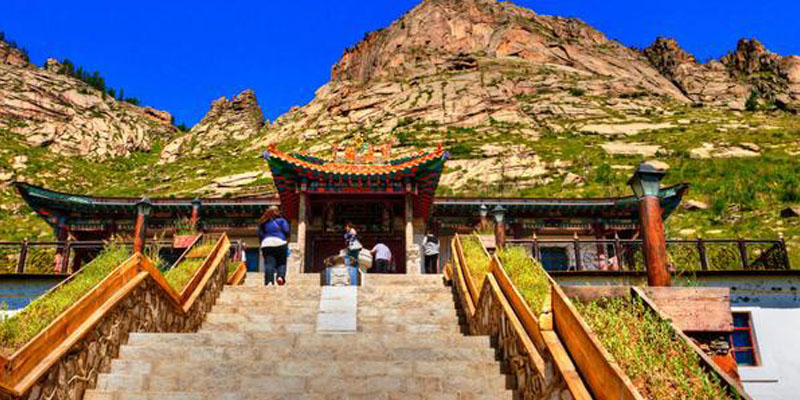 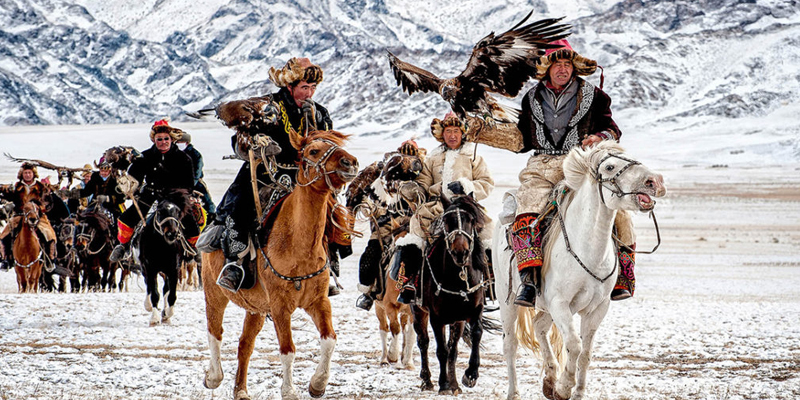 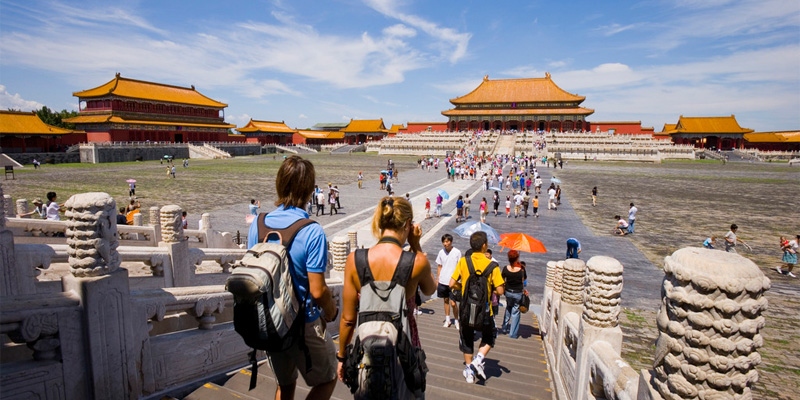